What are Biological Indicators?

Biological indicators, depending on the specific type, can be used for various sterilization processes using steam, hydrogen peroxide gas, ethylene oxide and more.

Several factors such as operator experience, load preparation and sterilizer condition can impact the sterilization cycle. BIs provide a direct measure of the lethality of the process and so the use of BIs to routinely monitor sterilizers provides assurance in the efficacy of the sterilization process.

BIs are typically used within process challenge devices (PCD) that are designed to represent the most challenging products routinely processed. A passing result for the BI within this defined challenge demonstrates that the sterilizer is effective in killing a large number of highly resistant bacterial spores, providing users with a level of assurance in their sterilization process.

A biological indicator is made up of a carrier material, on which bacterial spores with a defined resistance to the sterilization process have been applied. The carrier material is enclosed within a glassine envelope or a vial. The BI is exposed to the sterilization process and then incubated under defined growth conditions to determine whether any spores survived the process. If no spores survive, none grow and the test is a pass. If growth is detected, the test is a fail.1

Regardless of the type of process or application, Sterile Processing staff should always follow the manufacturer's instructions for use (IFUs) when using a biological indicator to monitor sterilization processes.

Biological indicators (within a PCD) are often used for routine monitoring, qualification and load monitoring of a steam sterilizer. Biological indicators are designed to demonstrate whether the conditions during a steam (autoclave) cycle were adequate to achieve a defined level of microbial inactivation. For steam sterilization, BIs are typically used within PCDs and AAMI ST79:2017 recommends using PCDs weekly, preferably daily, for monitoring sterilizers and in every load containing implants.

The PCD containing the BI and/or a chemical indicator should be placed in the most challenging location in the chamber. In a steam sterilizer, this is typically on the bottom shelf near the drain. Upon completion of the cycle, the PCD is taken out and the BI is incubated. After incubation the BI result is read. Incubators or readers will provide a final pass or fail result within a specified amount of time.

As per AAMI ST79:20172, PCDs containing biological indicators should be used for routine monitoring of steam sterilization cycles at least weekly, preferably daily, and in every load containing implants. Sterile Processing Department staff should follow the manufacturer's directions for the appropriate placement of the PCD containing the BI in the sterilizer.

Besides routine sterilizer monitoring, PCDs containing BIs are also used for other applications as listed below: 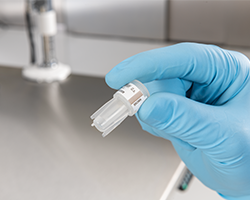 There are various types of biological indicators depending on the need and sterilization process. The most common type is self-contained biological indicators (SCBI). These indicators combine the carrier material with spore and growth medium into a single vial, eliminating the need for aseptic transfer.1 Following sterilization, the vial is activated allowing the spores to mix with the growth medium and incubated to allow spore growth. Some SCBI designs use an enzyme-based detection system that can detect enzyme activity faster, with shorter incubation times.

Where to Buy Biological Indicators?

Healthcare facilities should purchase BIs from a reliable, accessible source for easy reordering. Biological indicators can be purchased from companies that offer sterilization and infection prevention products. Factors that may be considered when deciding which biological indicators to purchase include incubation time, brand name, cost, range and variety of products, validated applications and ease of use. Refer to ISO 11138-7:2019 for more information on supplier selection. 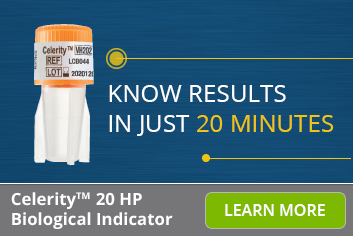