The Complete Guide to a Polypectomy 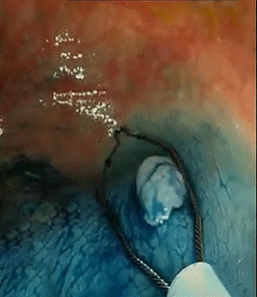 What is a Polypectomy?

A polypectomy is the removal of a polyp from inside the colon. These procedures are typically minimally invasive and can be performed by gastroenterologists or colorectal surgeons. During a colonoscopy, polyps are identified through the use of a colonoscope. A colonoscope is a long, thin, flexible tube with a camera and light at the end which helps to visualize the colon. If polyps are identified, the endoscopist will usually remove them during the colonoscopy. The endoscopist will decide how to remove the polyp based on what kind of polyp is found.

Colon polyps are one of the most common types of polyps found in the body, with more than 40% of individuals over the age of 50 having precancerous colon polyps.1

A polyp is an abnormal tissue growth on a mucous membrane. These are usually benign (noncancerous) but can turn to cancer if not removed.2 Individuals with colon polyps often do not have symptoms, stressing the importance of regular colonoscopy exams for individuals over the age of 45.

Just as polyps can vary in location, they can vary in size, shape, and type. Polyps are mostly small and round but can also be flat, bumpy, multiple polyps grouped together, or on a stalk-like a mushroom (pedunculated).3 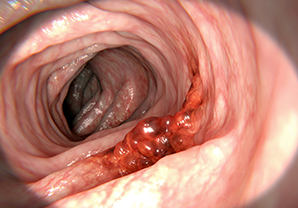 Colonoscopy with polypectomy is a very common procedure. While polyps found in the colon can arise spontaneously, there are common risk factors such as family history, age, excessive smoking or alcohol use, obesity, and other conditions affecting the intestinal tract.4 Oftentimes, patients exhibit no symptoms; however, some polyps can cause abdominal pain, blood in the stool, or changes in digestion. The American Cancer Society recommends that people at average risk of colorectal cancer start regular screening at age 45.5 Colonoscopies are recommended in 10-year intervals, but they may be recommended more frequently if risk factors are high.6 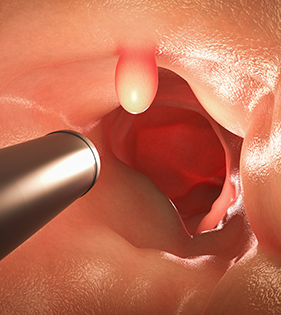 Clinicians will use a variety of tools during polypectomy procedures. Endoscopic polypectomy tools include: 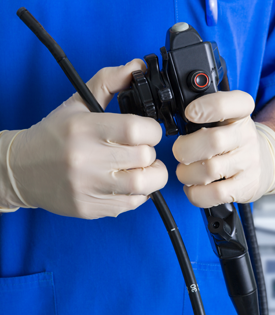 A colonoscopy is the main method for colorectal cancer screening, but there are other options that differ in how often adults should be screened. Visual (structural) examinations, which include colonoscopy, computed tomography colonography (CTC), and flexible sigmoidoscopy (FS), are recommended screening methods anywhere from 5-10 years, depending on which option is selected. Stool-based screening tests are usually recommended to be done between one and three years depending on which test is selected.10

Visual exams (Colonoscopy) typically require less frequent screening compared to stool-based tests. A colonoscopy will allow the doctor to see the full colon (large intestine) and remove polyps during the procedure. Stool-based screenings have fewer immediate risks because they are not invasive. Stool-based tests help to reduce the need for repeated screenings but are less effective for advanced adenoma detection. These screenings may be less expensive than visual examinations, can be done at home, and sometimes do not require diet or medicine restrictions prior to the test.10 However, there is a risk of false positives or false negatives with the use of stool-based tests.

Once polyps are removed during a colonoscopy, the tissue samples will be sent to pathology for review. Pathology reports provide insight into the type of polyp and additional treatment, if necessary. Information typically contained within a colonoscopy pathology report includes:

Once a mass is determined to be cancerous, the report will determine the stage of cancer – from Stage 0 to Stage 4 – depending on the progression. The American Joint Committee on Cancer uses a TNM system to determine the stage of cancer. The T stands for Tumor, investigating where the tumor is growing and how it is growing. The N stands for Node and involves determining if the tumor has impacted the lymph nodes. Lastly, M stands for Metastasis, where doctors examine the rest of the body to see if cancer has spread anywhere else.13 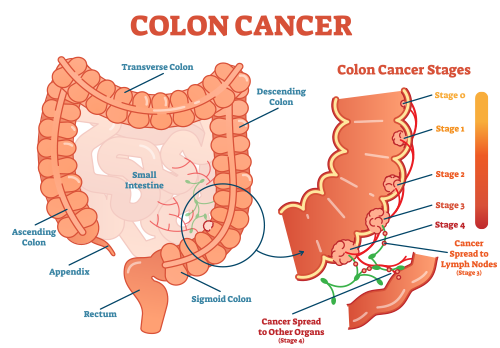 Colorectal cancer can also be described by its grade. The grade is determined by how many cancer cells look healthy when a doctor views them through a microscope. If the grade of the cancer is lower, that will result in a better prognosis. The doctor may also be able to predict how fast cancer will spread depending on the cancer’s grade.14

When determining the survival rate for colorectal cancer, cancer is analyzed based on three different categories that the SEER database (maintained by the National Cancer Institute) recognizes.15 These categories are localized, regional, and distant. Localized means cancer has not spread anywhere else in the body. In the case of colorectal cancer, regional means cancer has spread from outside the colon/rectum, but only to nearby structures. Distant means cancer has spread to different parts of the body that are further from the colon.

Looking at data from SEER (Surveillance, Epidemiology, and End Results Program), the following numbers are from people diagnosed with colon cancer between 2010 and 2016:15

The following numbers are from people diagnosed with rectal cancer between 2010 and 2016:

If the cancer is too advanced to have surgery, or the risk is too high for surgery, other treatments for colorectal cancer include:17