Foreign bodies take on many different forms. They are typically found in the esophagus, also known as foreign object ingestions (FOI), but can also be found in the stomach and rectum. They range from coins, paperclips, and safety pins to a more common type called food bolus. Food stuck in the esophagus is more common in adults, while button batteries and coins occur more frequently in children. If something is stuck in your throat or you are unable to ingest liquids, prompt medical attention is necessary and removal should be considered within the next 24 hours.1

What Do You Do When Faced with a Throat Obstruction?

Impaction or obstruction of foreign bodies often occurs at anatomic sites that are narrowed or angulated. A gastroenterologist will insert an endoscope into the esophagus and attempt to extract the foreign body or food impaction by using a foreign body retrieval device, such as a grasping forceps, pronged grasper, or retrieval net. An overtube may be placed to protect the patient's airway and esophageal mucosa from injury.

What is Foreign Body Management? 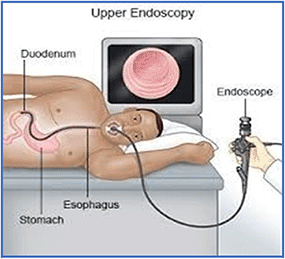 Procedures are typically performed by a Gastroenterologist or a General Surgeon. If the foreign body is in the most proximal portion of the esophagus, it may be best dealt with by an otolaryngologist. An endoscopically trained physician will insert an endoscope into the esophagus, stomach, or colon in order to evaluate the cause of the problem and attempt to treat and/or remove it. See the image of a typical upper endoscopy, also known as Esophagogastroduodenoscopy (EGD).

Many foreign bodies are radiopaque, and an X-ray may be used to provide more information on the location and type of foreign body to determine the type of intervention. It will fall into one of the following categories: Emergent Endoscopy (immediately or less than 12 hours), Urgent Endoscopy (within 24 hours), or Non-urgent Endoscopy. A surgical consultation may occur if endoscopic intervention is not successful. FOI management based on the type/characteristics of the object is outlined in the chart below.6

The American Society for Gastrointestinal Endoscopy (ASGE) Guideline for the management of ingested foreign bodies states the equipment that should be readily available for endoscopic retrieval include: rat tooth and alligator tooth forceps, polypectomy snare, polyp grasper, Dormier basket, retrieval net, and an overtube in both esophageal and gastric lengths. Physicians can be prepared by referencing this essential foreign body checklist.

What is considered a foreign body in the digestive tract?

A foreign body is an ingested food or object which becomes lodged within your digestive tract. For example, a swallowed piece of chicken unable to pass from the esophagus into the stomach is considered a foreign body. It is an object that is stuck inside your digestive tract and is not supposed to be there. A foreign body is most likely to occur in areas of the gastrointestinal tract that have a natural anatomical narrowing such as the cricopharyngeus, aortic arch, GE junction, pylorus, duodenal c-loop, ligament of Treitz, ileocecal valve, or rectum. Prior gastrointestinal surgery or other underlying pathologies, such as eosinophilic esophagitis or Schatzki's rings, can also increase the risk of food impaction.

What are the Most Common Foreign Body Objects Swallowed or Inserted?

The most common types of objects removed during endoscopic foreign body retrievals can vary depending on the age of the patient. About 80% of all foreign body cases occur in children ranging from six months to three years of age. Common ingestions found in children are coins, buttons, marbles, various toys and toy parts, safety pins, magnets, and disk batteries.3

An estimated 20% of adults that ingest a foreign body do so while eating. The most common “throat obstruction” is food stuck in the esophagus, called Food Bolus, (i.e. steak, pork, chicken).4 Pronged forceps or retrieval nets are often initially used because of their ability to allow for complete removal of a food bolus rather than doing so in a piecemeal fashion. However, there are a variety of other foreign bodies that adults ingest whether accidentally or intentionally. In the adult, these consist of coins, buttons, batteries, needles, toothpicks, fish bones, dentures, razor blades, spoons, toothbrushes, and pens.

Other devices recommended by ASGE to have readily available to retrieve these types of foreign bodies, besides pronged graspers and retrieval nets, are Dormier Baskets for sharp and long objects. Also, rat tooth/alligator tooth hybrid forceps are ideal for sharp objects like needles and safety pins. Another obstruction or foreign body lodged within the digestive tract to consider is Bezoars. Bezoars are a hardened collection of foreign material that becomes fixed in the stomach or duodenum. They are typically made up of vegetable material or hair.2 A retrieval net is a good choice when removing this type of foreign body, due to its ability to encapsulate the object, preventing any risk of aspiration. Lastly, one of the most important products to keep on hand when dealing with any foreign body ingestion is an overtube. The ASGE recommends the use of an overtube to prevent the patient from aspirating as well as to protect the mucosa. The Guardus® overtube serves that purpose and provides a safety factor by eliminating the space between the scope and overtube, thus avoiding the added risks of mucosal damage in the esophagus. The use of overtubes also provides additional benefit by protecting the airway and allowing for ease in the event of multiple intubations.

What are the complications, risks, and symptoms of a foreign object in the body?

Some of the complications and risks associated with foreign body and food bolus cases include, but are not limited to, perforation, aspiration, and obstruction. 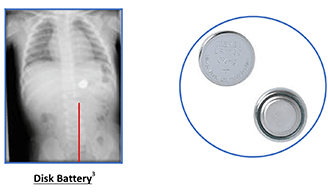 More than 100,000 cases of foreign body ingestion are reported each year in the United States. Children make up 80% of the incidences averaging in age from six months to three years.3 Children typically ingest objects they pick up and place in their mouths, such as coins, buttons, and marbles. In general, regularly shaped, smooth foreign bodies cause the least difficulty and commonly pass through the GI tract. Coins are by far the most common foreign body ingested by children. Most objects ingested by children will pass spontaneously.3

However, certain items are recommended for urgent and even emergent endoscopic removal due to the danger they present. Disk batteries, also called button batteries, are of special concern because they can cause serious complications if they become lodged in the esophagus. The contact with the mucosa with both polarities of the disc battery conducts electricity, which will result in tissue necrosis and perforation of the esophagus.3 The Roth Net® retriever is one of the most commonly used retrieval devices for coin and battery retrieval since it fully encapsulates the foreign body to protect the airway when passing the cricopharyngeus.

The prevalence of foreign body ingestion in the adult population, while much lower than the pediatric population, may occur with the following groups:4

The most common esophageal foreign body is food impaction, called Food Bolus – primarily chicken, steak or pork.4 One adult study revealed that 88-97% of the patients presenting with meat impaction were found to have esophageal disease upon endoscopic examination for example, a peptic stricture, tumor, Achalasia, or altered anatomy from a partial esophagectomy.5

How are foreign bodies retrieved or removed?

An estimated 10-20% of foreign bodies will require an endoscopic procedure to evaluate and remove the foreign body, with less than 1% of cases requiring surgical intervention.2 When dealing with foreign bodies, there are many possible variations in size, shape, and material. These are all factors that need to be considered and will help direct optimal therapeutic management. Doctors may perform an X-ray and physical exam to determine the best course of action when a foreign body will not pass on its own. Next, an endoscope is used along with a foreign body retrieval device (ASGE recommended) to assist in the removal of the foreign body.

Medical professionals can use a variety of tools to retrieve, grasp and remove blunt, sharp, and long object or objects.

For objects lodged in the esophagus or digestive tract, the following devices may be used and are recommended within the ASGE Guidelines as essential devices to have readily available.

Depending upon the size, shape, consistency and nature of the foreign body or food impaction, it is not uncommon for the endoscopist to utilize more than one retrieval device. These tools complement each other and facilitate the safe access and removal

There are many common removal techniques for foreign body retrieval depending on the type of object and its anatomical location. While some foreign bodies may pass spontaneously, others need to be removed due to potential risks and complications. For example, a sharp object in the esophagus requires emergent retrieval.

In summary, foreign body management is the procedural intervention for evaluation and treatment of symptoms due to ingested foreign objects. Depending on where the object is lodged and what the object is will determine the best course of treatment. Always consult with a medical professional to ensure proper treatment.

Contributors to This Article

Written in collaboration with Dr. Bennett Roth as a contributing editor

4Bekkerman, M, et al, “Endoscopic Management of Foreign Bodies in the Gastrointestinal Tract: A Review of the Literature.” Gastroenterology Research and Practice 2016.