What if One Chemical Indicator Fails? | Knowledge Center

What if One Chemical Indicator Fails? 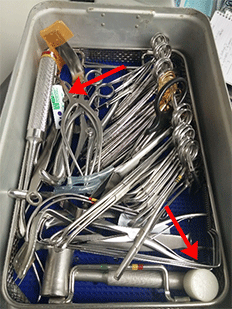 Everything was done as expected – the devices went through decontamination, completed a successful washer and thermal disinfection cycle, and were inspected, prepared and packaged successfully following all steps outlined in the instrument tracking software.

The sterilization protocol was followed, the cycle was successful, all critical sterilization parameters were met, and the Biological Indicator (BI) was negative. The sterilization load was properly stored and released. Every step was successful. But now, a pack is back in the Sterile Processing Department (SPD) because the Operating Room (OR) found a failed chemical indicator and returned the complete unused set to the SPD. Now What?

Internal chemical indicators used in a Central Sterile Services Departments (CSSD) are placed so that at least one CI is visible to the person opening the packaging, and in areas that are considered least accessible to sterilant penetration. As always, follow applicable Instructions for Use and facilities policies/procedures.

But what if only one Chemical Indicator fails?

It's important to understand that we're talking about internal chemical indicators. A failed CI such as a Bowie-Dick test, should be treated differently, as these failures identify a possible equipment malfunction that should be investigated. Download the Bowie-Dick Troubleshooting Guide.

If one internal CI in a sterilization load fails, this identifies a failed set - not an entire load. The purpose of the internal CI is to confirm that steam penetrated the specific set. A failure of a single pack could be due to several reasons including an air pocket, incorrect packaging or the configuration of the tray which prohibited sterilant penetration. Typically, the whole sterilization load is only considered failed if the BI shows a positive result, or in the case of wet packs after steam sterilization.

What Do the Standards Say?

"If a CI is nonresponsive or inconclusive, it is possible that the entire load is not sterile (i.e., the sterilization process failed). It is also possible that errors in loading or packaging have resulted in sterilization failures in some, but not all, packages in the load. Therefore, a single nonresponsive or inconclusive CI should not be considered definitive evidence that the entire load is nonsterile. The supervisor should exercise professional judgment in determining whether to recall the entire load, taking into account all factors having a bearing on the efficacy of the cycle and all performance indicators (physical monitors, CIs, and BIs)."

Where the Failed Chemical Indicator is Found

If a failed CI is identified in the SPD, this typically means it is a Type 1 external chemical indicator and the pack was not properly exposed to sterilant. If it was part of a challenge test pack for qualification testing, treat this as a sterilization failure. In both cases, follow your facility's policies and procedures.

All peel packs should be inspected prior to release to make sure all internal chemical indicators have all turned. Since these packs should have never made it to the OR they would have been discovered in the SPD. The pack should be opened, and the device should be reprocessed.

Internal failed CIs discovered in the OR should result in the rejection of the set and should be returned to decontamination for full reprocessing. Follow your facility's policies and procedures for sterilization failures.

If only one chemical indicator has failed and an equipment malfunction, such as an autoclave malfunction, is not suspected, then loading technique should be reviewed as a possible cause of the failure. 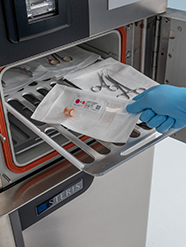 Loading technique is a common cause for sterilization failures. Ensure placement in the chamber is appropriate, and not to overload the sterilizer.

Generally, when one failed CI is discovered, loading technique should be the first thing reviewed and the set or package should be opened and reprocessed. Facility policy and procedures should be used to determine whether to recall the entire load, and all performance indicators such as physical monitors, other CIs in the load, and biological indicator results should be reviewed.

To Learn more about Chemical Indicators: