With numerous clinical applications – including the treatment of Barrett’s esophagus, esophageal cancer, and airway diseases – spray cryotherapy is a cutting-edge technology gaining popularity due to its minimally-invasive technique. Learn more about cryotherapy’s uses in common medical procedures, the diseases it helps treat, and its success rate for a variety of illnesses.

What is Spray Cryotherapy? 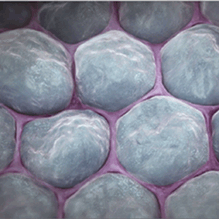 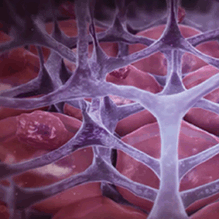 Watch an informative video overview of the technology behind spray cryotherapy as shared by Dr. Michael Smith, MD, MBA

Spray Cryotherapy Treatment of the Esophagus

Spray cryotherapy is a treatment option used to ablate (destroy) benign and malignant esophageal diseases such as Barrett’s esophagus, strictures, and cancer. Barrett’s esophagus can be caused by gastroesophageal reflux disease (GERD) which creates abnormal cells in the lining of the esophagus, called metaplasia. If left untreated, this can progress to low-grade or high-grade dysplasia. Of note, patients with high-grade dysplasia have an increased risk of progressing to esophageal cancer (malignancy). Repeat spray cryotherapy sessions may be necessary to ablate all diseased tissue and encourage the regrowth of healthy cells.

Additionally, spray cryotherapy can be used where other ablation modalities such as radiofrequency ablation (RFA) fail. One study demonstrated that liquid nitrogen cryotherapy (LNC) achieved a 75% complete eradication of dysplasia (CE-D) in patients who failed to get resolution of their Barrett’s esophagus after three radiofrequency ablation (RFA) procedures.2 As previously stated, if left untreated, Barrett’s esophagus can lead to an increased risk for esophageal cancer.

Spray cryotherapy can be used for cancer treatment in a variety of areas including esophageal, cervical, skin and many others. Liquid nitrogen cryotherapy (LNC) has been widely studied in the treatment of early cancers with curative intent and provides a palliative option for advanced disease. Malignant (cancer) cell death occurs when exposed to temperatures at or below -50°C. Liquid nitrogen spray cryotherapy utilizes temperatures of -196°C that can flash freeze and ablate cancers of the esophagus such as adeno/squamous cell carcinoma. It is important to note that truFreeze spray cryotherapy is the only endoscopic eradication therapy FDA cleared to ablate malignant cells.

A multicenter study performed by Dr. Toufic Kachaamy concludes that cryotherapy, in addition to systemic therapy (chemotherapy + radiation) for palliation of esophageal cancer, is well tolerated, associated with significant improvement in dysphagia and quality of life, and allows patients to maintain their weight without the need for stenting or feeding tube placement. For more information on this study, please visit: https://www.giejournal.org/article/S0016-5107(20)30848-8/fulltext3

When treating malignancy, repeat spray cryotherapy sessions may be necessary to ablate all diseased tissue and encourage the regrowth of healthy cells. The treatment plan for esophageal cancer varies by patient, stage of the disease, and options available. Consult a doctor or medical professional to determine if spray cryotherapy is an appropriate treatment option.

What are the Side Effects of Esophageal Cryotherapy?

Side effects of esophageal cryotherapy vary by patient and are usually minimal. The most commonly noted post-procedural side effects include a slight sore throat or discomfort when swallowing. In rare cases, patients may experience bleeding. In a study examining post-procedure pain after Barrett’s ablation, spray cryotherapy was proven to be less painful than another commonly used ablation method, radiofrequency ablation (RFA). This multicenter prospective study shows patients undergoing RFA had at least five times greater odds of experiencing pain compared with the liquid nitrogen cryotherapy (LNC) group. Additionally, patients in the RFA arm of the study were 2.5 times more likely to be prescribed medications for pain than those in the Cryotherapy arm.4

Pain intensity scores and the presence of dysphagia assessed for LNC vs. RFA:

What Data has been Published Showing the Success of Esophageal Cryotherapy?

Many studies have been published in support of cryotherapy ablation. Several recent studies shown below are great references for those looking to learn more about this treatment.

A multicenter prospective registry published data that shows liquid nitrogen cryotherapy was shown to have a Compete Response rate of 76% in ablation of early, (T1a) cancers.6

In a multicenter trial of 49 patients with inoperable esophageal cancer, liquid nitrogen cryotherapy showed statistically significant improvement in patients’ dysphagia (difficulty swallowing) taking them from an MDS (Mean Dysphagia Score) of 2.4 to 1.7 on the 4-point Lickert scale. Further, the study suggests that liquid nitrogen cryotherapy may be safe and effective for dysphagia palliation in inoperable esophageal cancer.7

Endoscopic spray cryotherapy can also be used as a treatment option for select gastrointestinal diseases, within the stomach and the rectal vault. Within the stomach liquid nitrogen cryotherapy has been utilized as a treatment option for gastric dysplasia, unresectable gastric cancers as well as gastric antral vascular ectasia (GAVE). GAVE is a bleeding disorder sometimes referred to as “Watermelon Stomach” because of the visual effect it causes on the stomach lining, causes the vessels to weaken, often resulting in bleeding or bloody stools.8

Spray cryotherapy has the ability to treat large areas of diffuse disease as well as focal lesions in the GI tract. Depending on the severity, multiple treatments may be needed to ablate the tissue and help promote cell healing.

What Data is Available on the Use of Spray Cryotherapy for the Treatment of Gastric Diseases?

In a recent peer-reviewed case, a transfusion dependent patient received 3 LNC sessions at 1-month intervals, then 1 additional LNC session 3 months out. Transfusional support was discontinued after 3 sessions of LNC as the patient’s hemoglobin normalized. EGD 6 months out, showed that the patient’s GAVE symptoms had improved.9

What are the Side Effects of Gastric Cryotherapy?

Side effects of gastric spray cryotherapy are similar to esophageal treatments. Patients may experience mild stomach pain or nausea within the first few days after treatment.

Spray Cryotherapy treatment of the other GI Tract disease states

In addition to uses in the upper GI tract, liquid nitrogen cryotherapy has been used in the rectum, most commonly for radiation proctitis, which is a common side-effect of radiation therapy for pelvic/prostate cancers. Extremely cold liquid nitrogen flash freezes the cells and reduces pain and bleeding in the treatment area.

Additional data on the use of liquid nitrogen cryotherapy within the GI Tract can be found on the subsequent Active Venting Bibliography.

Spray cryotherapy can be used in the pulmonary system to treat issues within the central airways and lung, including obstructions caused by benign or malignant tissue.11 Passive venting is a cryotherapy technique which involves the natural diffusion of gas (the byproduct of liquid nitrogen spray) from the ablation area and is used for treatments involving the pulmonary system. Spray cryotherapy uses the cryogenic properties of liquid nitrogen to flash freeze living tissue followed by passive warming to body temperature, which results in the rupture of intracellular organelles and cell death. Exposure to the fast temperature drop and the resulting cell death facilitates re-epithelialization over a period of time with minimal deposits of cytokines, which can result in minimal inflammation in the affected ablative area. liquid nitrogen cryotherapy has the following clinical benefits:

Tracheal stenosis, including subglottic stenosis, is a narrowing of the trachea that causes difficulty breathing. It can develop when scar tissue forms in a person’s trachea due to the following underlying etiologies: iatrogenic, idiopathic, autoimmune, or polytrauma. Some of the more common causes of benign tracheal stenosis (BTS) include prolonged intubation, airway surgery, Granulomatosis with Polyangiitis (also known as Wegener’s disease), and Tuberculosis. Tracheal stenosis can also be caused by malignant diseases such as lung cancer resulting in airway obstruction.

Tracheal stenosis can be classified based on the degree of obstruction into the following four grades:14

Spray cryotherapy is typically used in conjunction with other airway therapies such as mechanical dilation with a balloon or rigid dilator to treat tracheal stenosis. Spray cryotherapy applies liquid nitrogen through a flexible catheter passed through the working channel of a therapeutic bronchoscope to treat the affected part of the airway. Depending on the location and type of disease, this procedure may be performed by an Interventional Pulmonologist, Thoracic Surgeon, or ENT Surgeon.

What is the Success Rate of Pulmonary Cryotherapy for Tracheal Stenosis? 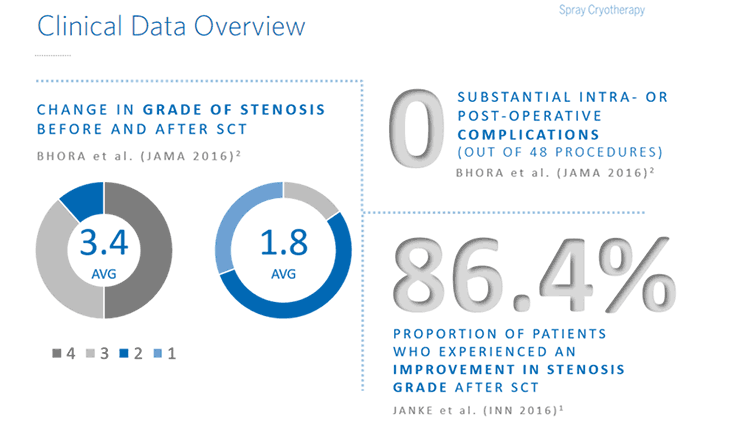 What is the Success Rate of Pulmonary Cryotherapy for Endobronchial Stenosis?

Endobronchial stenosis may be caused by either benign or malignant disease. Benign strictures may be caused by a variety of processes. Malignant strictures may arise from airway tumors or invasion of the airway by adjacent tumors. Endobronchial stenosis, regardless of etiology, can have an extremely negative impact on a patient's quality of life and is challenging to manage. Multiple modalities of treatment have been used with varying degrees of success to treat airway stenosis.

A recent study that combined liquid nitrogen cryotherapy with balloon dilation to relieve benign and malignant endobronchial stenosis yielded positive results in both cohorts. The median grade of stenosis was 4-malignant disease and 3.5-benign disease, on a 4-point scale. The median final post-treatment grade of stenosis was 2-malignant disease and 1-benign. Final patency of grade 1 was achieved in 80% of benign disease and overall, 86.4% of patients had an improvement in the grade of stenosis after treatment. These results provide evidence that the use of liquid nitrogen cryotherapy is equally efficacious for both types of stenosis with an expectation of overall improvement in luminal patency, offering a safe and effective method of achieving airway patency in a minimally invasive fashion.15

For more information on the success rate of cryotherapy in the airway, please visit this source.

Airway disease and treatments can vary widely and it is recommended to consult a medical professional on the best course of treatment and most up-to-date clinical data.

What are the Side Effects of Pulmonary Cryotherapy?

Spray cryotherapy treatment in the airways or lungs is minimally invasive, resulting in few side effects to patients. While rare, barotrauma can occur. This injury can happen by a pressure change when liquid nitrogen cryotherapy is released in the airways which converts to nitrogen gas rapidly. Failure to mitigate this gas expansion can result in barotrauma.

What are the Alternatives to Pulmonary Cryotherapy?

Spray cryotherapy is often used in conjunction with other treatments, like balloon dilation, radial cuts, stents, or steroids to help treat pulmonary disease.16

Additional data on the use of liquid nitrogen cryotherapy for pulmonary applications can be found in the subsequent Passive Venting Bibliography.

In conclusion, spray cryotherapy delivers liquid nitrogen to help ablate benign and malignant cells. Its treatment options are numerous – including esophageal, gastric, and pulmonary treatments. The treatment is minimally invasive, and the flash-freezing of the cells helps to promote a healing response in patients. Learn more about STERIS’s truFreeze Spray Cryotherapy System, including the console and both active and passive venting solutions.